The big news out of Phillies camp today was about Jayson Werth, who apparently misses Eric Bruntlett and wanted to carry forward the Grizzly Adams tradition:

Brad Lidge referred to the new style as “a combination between Jesus Christ and the caveman from Geico .”  So there you have it; bow down to Mr. Werth.  He is now your personal savior ;o)

And in following with the Phillies Spring Training practical joke tradition, like faking a Kyle Kendrick trade to Japan, this year an office staff member took the brunt of the joke.  Phillies director of baseball communications Greg Casterioto made the awful mistake of allowing himself to be interviewed for South Jersey magazine’s story about South Jersey singles.  The Phils took the GQ-like posed photo from the article, blew it up and put it not only on tee-shirts which the whole team wore today, but they also stuck it on the outfield wall at Bright House Field to complete the humiliation: 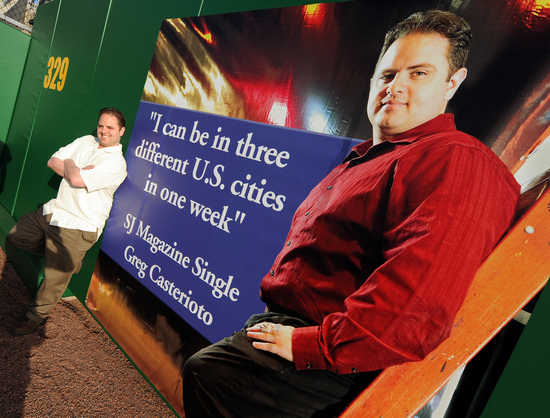 Shane Victorino was busy this off-season; not only did he get married, go on a cruise with me and 274 other crazy fans, he also managed to find time to design a shirt.  The Flyin’ Hawaiian style will be available on March 1st, but you can pre-order it on-line right now.  I totally see how his nickname goes with a winged skull…don’t you?

And in actual baseball news, Brad Lidge began throwing off a mound today and feels optimistic about being ready for Opening Day.  Same goes for JC Romero who will start throwing off the mound soon.  Pretty much all the players who had surgery this offseason including Lidge, Romero, Jamie Moyer and Raul Ibanez all say they feel good and are raring to go.  We shall see!

*Read more about the Phillies at my other home page, Phightin’ Phils Phorum in the My Team Rivals network*