With a 7-2 win today, the Phillies collected the series win against the defending World Champion Royals.  The fun began even before the game started as the Phanatic tormented Royals player Salvador Pérez by dumping a bucket of confetti on him.  Perez tried to fight back by tossing water, but the Phanatic used a small child as a human shield to avoid the soaking.  Eventually, Perez stole the Phanatic’s car keys and then they made up. 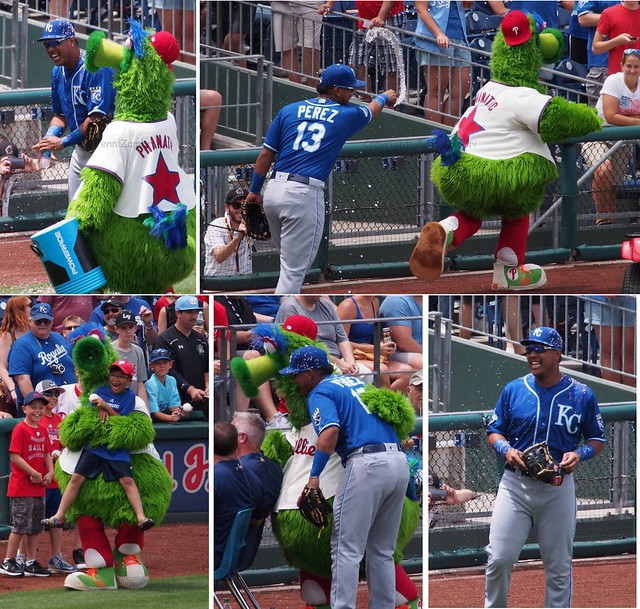 More excitement ensued in the first inning when, after only 5 pitches, the manager, pitching coach, team trainer and half the team made a visit to the pitching mound to check on starter Vince Velasquez.  His velocity was down around 85-90mph, which triggered panic, especially since Velasquez is fresh off an injury.  But Velasquez pitched well, despite the slow down of his fastball.  He went 6 innings and allowed only 2 runs.

In the bottom of the 1st, Cameron Rupp kick-started the offense with a 3-run homer.  The Phillies went on to score 7 runs on 3 homers and 11 total hits.  Cody Asche and Maikel Franco also hit long balls.

Asche also shattered his bat during another plate appearance, sending Royals scrambling for cover.  Luckily, no one was hurt. 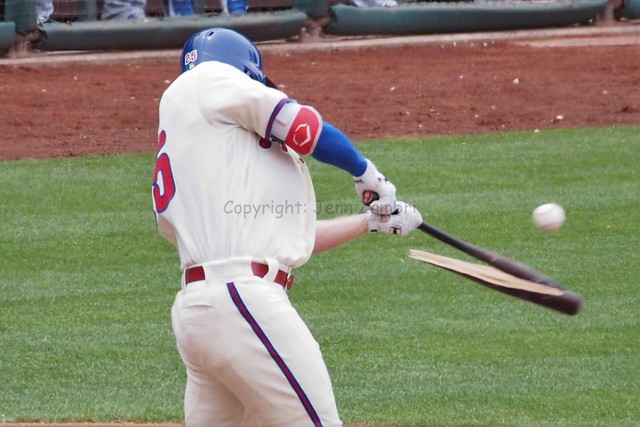 The bullpen was able to hold down the lead after Velasquez left the game.  Edubray Ramos, Hector Neris and Jeanmar Gomez finished out the game strong with little drama.

So after a very bad month-long stretch where seemingly nothing went right, it looks like the Phillies are finally back on track.  Here is the full Photo Album from the game.

The Phillies begin a series tomorrow against the Braves at 4:05pm.  Happy Independence Day, everyone!