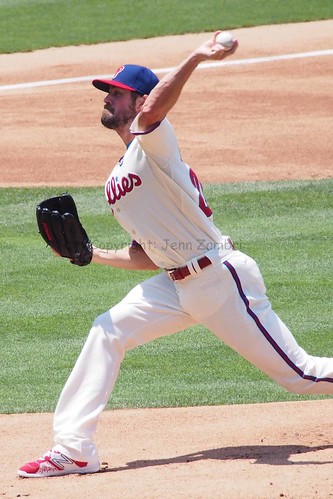 A few days ago, the Phillies completed a trade with the Nationals for Jonathan Papelbon.  I am not sure if anyone in Philly is really sad to see Papelbon and his crotch-grabbing, fan-hating attitude go.  But the Cole Hamels trade announced last night is a different story.  It is bittersweet to see one of the best pitchers in Philly go to the Rangers, but the trade is in the best interest of all involved.  There was no need to let Hamels waste away on a rebuilding team; he is now on a team that at least has a chance of winning this year or in the very near future.

And Hamels will not be going to Texas alone; lefty reliever Jake Diekman is joining him.  Diekman has had a very up and down (mostly down) year so this is probably not a huge loss for the Phillies.  Although, I really liked Diekman; he was one of the friendlier guys on the team and also has great potential as a pitcher.  But he has struggled with throwing strikes and the Phillies’ patience wore out.

The Hamels trade is not technically “official” yet, but all media reports say the deal is nearly final.  The prospects the Phillies are expected to get in return include a pretty good catching prospect, Jorge Alfaro and outfielder Nick Williams.  The other three players are pitchers who are very young and have a ways to go before we will know their worth.  The Phillies also reportedly will get 29-year-old lefthander Matt Harrison who is working his way back from back surgery.  It is likely that portion of the trade will be a bust so let’s hope the youngsters are better.

So while it is sad to see Hamels go, I wish him luck.  Unless, of course, he is pitching against the Phillies.  Then all bets are off.