On Opening Day this past Monday, the Phillies got trampled by the Red Sox in a 0-8 loss in front of what will probably be the only sell-out crowd they will see this season.  Well, at least the pre-game activities were fun as usual. 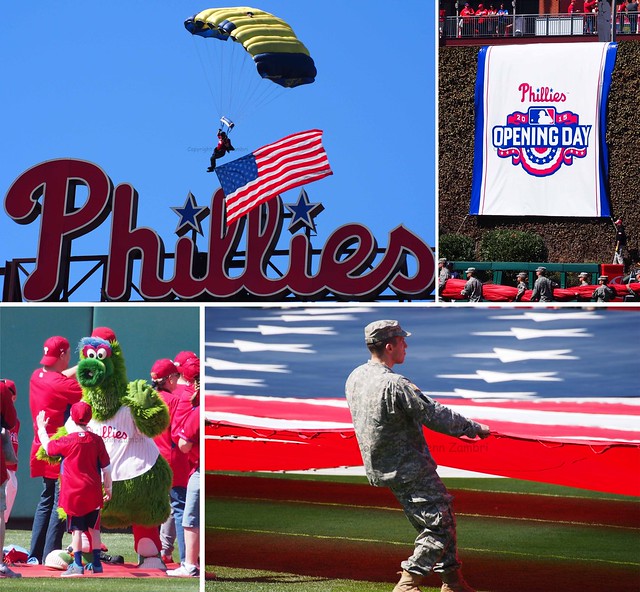 One thing we learned from the ceremonies was that Jonathan Papelbon thinks Phillies fans have cooties, as witness by his gloved hands in the pre-game entrance: 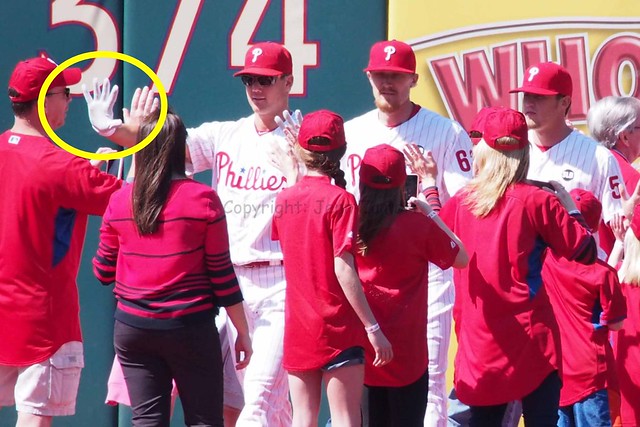 The next time a fan runs into Pap, they should fake sneeze on him for fun.  If anyone gets the opportunity, please let me know…thanks!

The only other real highlight of the day was seeing our old buddy, Shane Victorino.  He got a standing ovation before his first at bat, which was well deserved.

And then the day went downhill from there.  Cole Hamels was awful; he could not hit any of his spots and the Red Sox wasted no time taking him yard.  Hamels allowed 4 home runs in only 5 innings, two of which came off the bat of super mini-sized ball player, Dustin Pedroia.  He is little and adorable, I’ll give him that.  But he seriously needs to stop beating up on the poor, defenseless Phillies who are clearly in awe of his short stature.

However, the smallest thing in the stadium on this day was the Phillies offense.  They were no-hit through 3 innings and then only managed 3 hits total for the whole game. 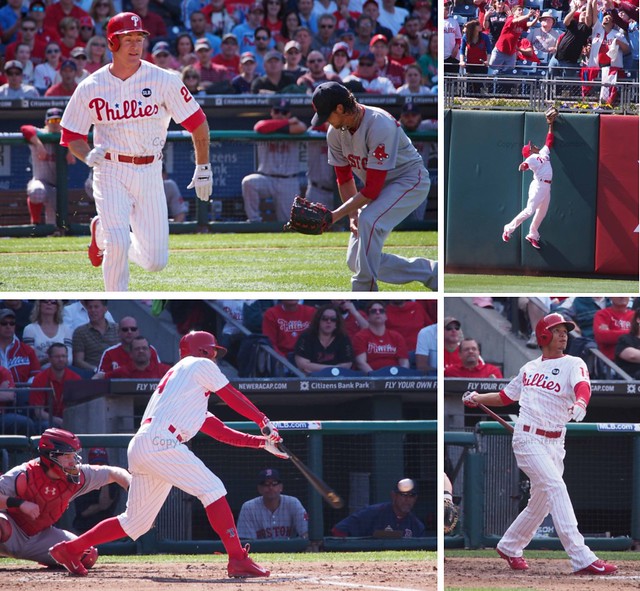 Jake Diekman got beat up as well; he gave up a Grand Slam to Hanley Ramirez who also had 2 homers in the game.  If this performance is a taste of what is to come, it is going to be a long season.  Buckle in Phillies fans…the next game is Wednesday night at 7:05pm.

And here is the Photo Album from Opening Day. 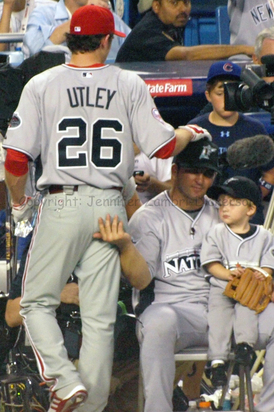 Thanks to my friend Sue at Rants, Raves, and Random Thoughts, it has indeed been a Happy Buttday.  Check out her birthday gift to me.  Great stuff…Thanks Sue!  Chase Utley wanted to wish me a Happy Birthday too, but he was busy being harassed by Dan Uggla.  So, I offer this photo tribute, in keeping with the Buttday theme ;O)

Sadly, Cole Hamels was also unable to participate in my birthday celebration, as he is on his way back to Philadelphia to have his head….errrr, I mean his elbow, examined.  Although, he may want to consider the head exam while he is at it :O)  Seriously, Hamels has been experiencing soreness in his elbow, not while pitching, but apparently afterwards.  GM Ruben Amaro Jr. seems to think it is not serious, but they are being very careful with the staff ace.  After pitching more innings in 2008 (227.3) than he had in his entire minor league career (201 IP from 2003-2006), Hamels may just need some extra time to get ready for the season.  Fingers crossed…

Kyle Kendrick got another spring start today, as he struggles to stay afloat in the battle for the 5th starters spot.  He did not fair very well.  Kendrick did get out of some jams, as Phillies fans have gotten used to with him; but he also got into situations where he could not bail himself out.  Kendrick wound up surrendering 5 runs and 3 walks in 4 innings.  It looks more and more like Kendrick may have punched his ticket back to the minors.

Currently in the 6th inning, the Phillies are losing 6-0 to the Yankees.  Joba Chaimberlain got the start for New York and gave up only 2 hits in 3 innings.  If there are any significant game developments, I will update them here later.

Jimmy Rollins led the charge for Team USA yesterday as they ran the Netherlands out of the classic; Rollins went 2 for 4 with 4 RBI, including a 2-run homer.  Helping him out was Brian Roberts who just joined the team to replace the injured Dustin Pedroia; Roberts ended the game 1 home run short of the cycle with 3 hits, 2 walks and 1 RBI.

Although the USA took a convincing lead early and won 9-3, the game was not without drama.  USA pitcher, Matt Lindstrom took exception to Dutchman, Bryan Engelhardt’s  lolly-gagging around the bases after hitting a home run off him in the 8th; Lindstrom took aim in retaliation at the next batter, Vince Rooi, and tossed the ball at his rear-end.  Obviously, he was just preparing to celebrate my Buttday, along with everyone else.  But Engelhardt and the rest of the Netherlands apparently did not get the Buttday memo; the benches nearly cleared as the Dutch shouted out at Lindstrom in anger.  The fray was over before it began and the game went on; all butt’s still intact ;O)

Thanks to everyone who voted for my blog on The Max’s “Max Madness” bracket challenge.  I have made it past the 1st round by defeating NL East rival blog, Pick Me Up Some Mets.  In round 2, I fully expect to go down in flames, as I have been pitted against super-blogger, Julia’s Rants.  But if I have to lose to anyone, I do not mind losing to Julia…she is a sweetheart :O)  So, thanks again for your votes and maybe I’ll get a couple in round 2, so I am not totally embarrassed when I crash and burn ;o)

Next up for the Phillies

Tuesday at 1:05pm, the Phillies will take on the Reds at Bright House field in Clearwater, FL. 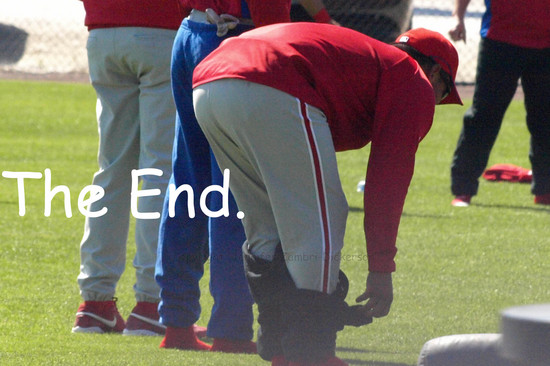 *Read more about the Phillies at MY OTHER HOME PAGE!  Phillies Phollowers has joined forces with Phightin’ Phils Phorum! Please check out our site and bookmark it.

Watching Team USA with Jimmy Rollins and Shane Victorino playing against the Phillies was strange, to put it mildly.  Although, who to root for was easy – both!  Yet, the sight of Victorino sliding into base with a Phillies glove coming at him did feel wrong somehow; but even more confusing was watching Victorino and Rollins team up with rival New York Met, David Wright, Atlanta Brave, Chipper Jones and Red Sox, Dustin Pedroia.  Here are 4 of them celebrating after a Jones homer run plus, Victorino sliding into second and Rollins letting everyone know that he is working hard: 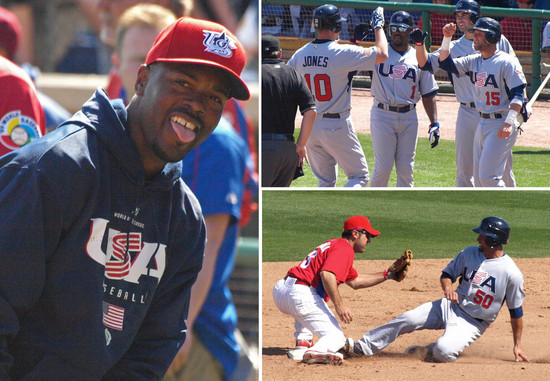 Victorino and Rollins each had one hit for Team USA today and minor league Phillie, Joe Bisenius pitched for Team USA, giving up 1 run on three hits in his one inning of work.  Also for Team USA, Derek Jeter went hitless in his 6 innings, but showed off defensively, as usual.  Chipper Jones and Red, Adam Dunn led the charge against the Phillies, collecting 3 RBI a piece.  Below, see Jeter make a great leaping throw; Mike Cervenak slides into second trying to break up a double play, forcing Pedroia to jump over him; and J-Roll swings and misses: 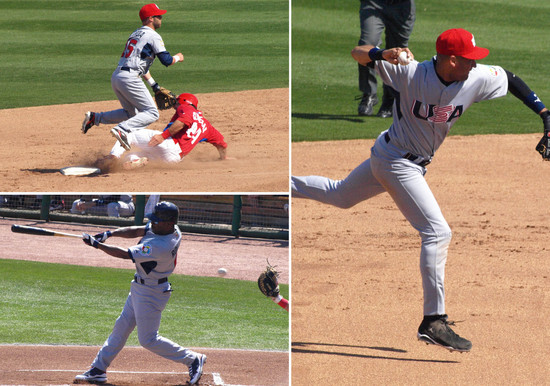 On the Phillies side, Eric Bruntlett and Cervenak each earned an RBI and Jason Donald woke from his slumber, hitting a solo homer in the 6th.  Catcher Lou Marson was the only Phillie with a multi-hit game, going 2 for 4.  The big score came from Ryan Howard, who knocked a 3 run homer in the 5th.  However, Howard had a very strange day.  In the first inning, Howard dropped a routine feed from Donald, allowing the runner to reach base.  Then, in the third inning, he got whacked in the helmet with a pitch, but appeared to be fine.  Later, Howard dropped a routine pop-up off the bat of Victorino and then also dropped a pick-off toss to first as Victorino slid back in safely, although, that looked to be a bad throw by Kyle Kendrick.  Here are a few photos of the events at hand; note where the ball is in the top 2 photos; the bottom photo is the home run shot: 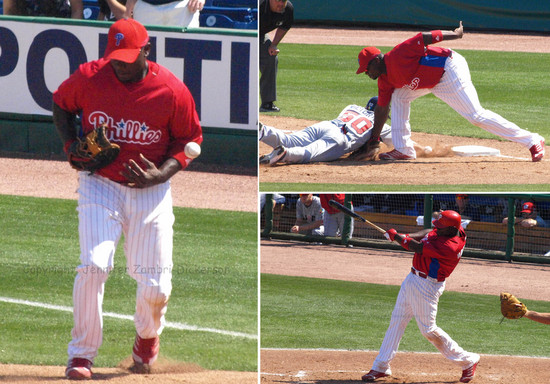 Aside from Howard’s fumbles, the big story of the day appears to be Kyle Kendrick who did not look good.  In 2 2/3 innings, he surrendered 5 hits and 4 runs, including the 3 run shot by Jones, which, by the way, I called as it happened.  As shaky as Kendrick was and seeing he could not keep the ball down or his emotions in check, once Chipped stepped to the plate, I told my neighbor what was about to happen and, wham!  3-run home run.  Kendrick has a lot of work to do if he is going to compete for the 5th starters’ position.

Equally unimpressive was the outing of Antonio Bastardo, who gave up 5 runs on 3 hits and 2 walks.  Regulars Clay Condrey and Ryan Madson got some work in also and each looked ok, although Madson did walk 2.  In the end, the Phillies went down by a score of 9-6.

And now for the Photo of the Day – Team USA united! 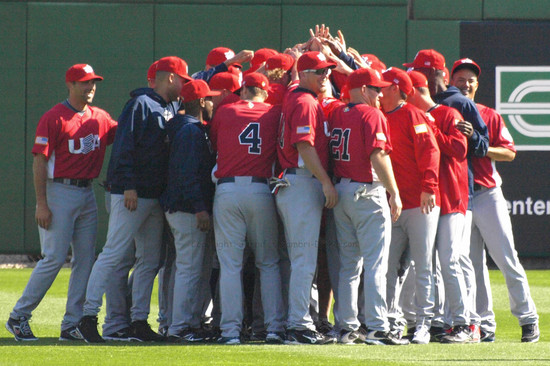 The Phillies have both an A and a B game tomorrow against the Blue Jays; the B game is at 2pm at Bright House field and the A game is in Dunedin at 7pm.  Sadly, my time in Florida has come to a close and I will be hopping a plane back to the deep freeze of the Philadelphia area tomorrow.  I will continue my coverage from home, although be terribly depressed about it :O(  I know, I know…poor me.  Hee!  It was fun while it lasted!

*Read more about the Phillies at MY OTHER HOME PAGE!  Phillies Phollowers has joined forces with Phightin’ Phils Phorum! Please check out our site and bookmark it.