Yesterday, the Phillies took on “Future Phillies” in a pre-season exhibition game at Citizen’s Bank Park.  Before the game, several current and future players wandered around the ballpark signing autographs and taking photos with fans.  I managed to snag 5 autos and 2 photos with players.  I also met both Opening Day starters; Jeremy Hellickson, who will start the official Opening Day tomorrow and Aaron Nola, who will get the home opener.

It was strange having to root for both teams playing, but entertaining.  The youngsters keep the game very close and both sides appeared to be having a good time. 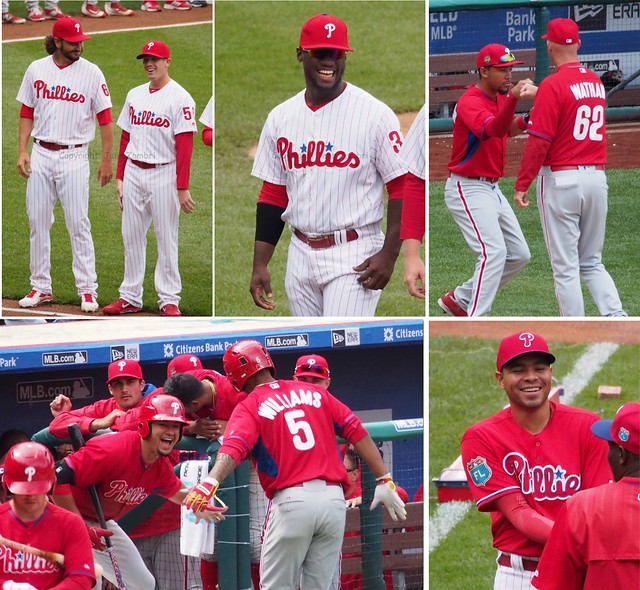 Pitcher Charlie Morton did not look very sharp, as the future players collected 4 runs on 7 hits and 3 walks over 4 2/3 innings.  But the game didn’t really count, so no worries.

Two other pitchers who looked really sharp were Brett Oberholtzer and James Russell.  Both guys are large and intimidating, and Russell just made this team a bit hairier.  As a side note, Oberholtzer is from Delaware; he spent parts of the last 3 seasons with the Astros.  And Russell is a 6-year veteran who spent most of his time with the Cubs.

Some other newbies also seem promising.  Tyler Goeddel is a Rule 5 player, just like Odubel Hererra was last year; he went 2 for 5 and stole a base.  And Cedric Hunter, who has been languishing in the San Diego minors for 6 years, is going to get a real shot at the big leagues.  It was announced today that he made the team, 10 long years after being drafted and playing only 6 games in the majors during that time.

So the full roster is going to look like this: 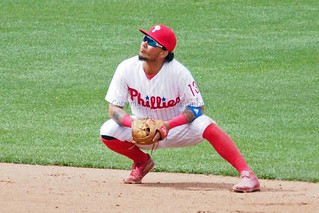 The team is not going to be great, with all the young players, but they may not be as bad as everyone thinks.  It will at least be an interesting season, full of growing pains and likely a few nice surprises.  Here is the Photo Album from the game.