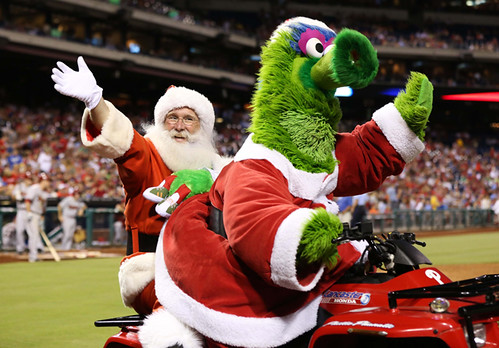 Twas the night before Christmas, when all over the field,

Not a player was stirring, as the 2015 season had been sealed.

The bats were stacked in the clubhouse with care,

In hopes that a winning season someday would be there.

The Phillies were nestled all snug in their beds,

While visions of trophies danced in their heads.

And Pete Mackanin, with a managerial contract tucked under his cap,

Had just settled down for a long off-season nap.

When outside of his house, there arose such a clatter,

Pete sprang from the bed to see what was the matter.

Away to the window he stumbled, half asleep,

Having woke from a nightmare of a 2015 repeat.

The man in the moon stared down in discontent,

As he wondered what the crazy Ken Giles trade really meant.

When what to his weary eyes should appear,

But a miniature sleigh filled with many kegs of beer.

With many little pint glasses, so shiny and thick,

He knew in a moment, this would do the trick.

More rapid than the trade deadline, forward all the new no-name players came,

And he whistled, and shouted, and attempted to call them by name!

“Now, Marion! I mean Morton! Now, wait, what was your name?!

Hey, old guy! Hey, player I’ve never heard of! Why are you here?!

To the top the roster! To the bottom of the league!

Now run away! Run away! And have a drink on me!”

And then, in a twinkling, Pete heard, “Should I pitch or just warm the bench?!”

From the shouting of drunken, no-name players recently dug out of a trench.

As he drew in his head, and was turning around,

Down the chimney, Phanta Claus came with a bound.

He was dressed all in pinstripes, from his head to his foot,

And his clothes were all tarnished with ashes and soot.

With a bundle of coal baseballs he had flung on his back,

It looked a lot like it may be time for some fans to deliver payback.

Phanta Claus spoke not a word, but went straight to his work,

Handing out balls to the fans, who have grown tired of players not doing their homework.

And with thunderous joy, the fans tossed the balls,

And yelled, “Practice!  Please, practice! Before this team hits another wall!”

Phanta Claus then sprang to the sleigh, and to the team and fans gave a call,

“Hang in there everyone, pretty soon, I think we will have better baseball!”

But they heard him exclaim, as he drove out of sight,

“Merry Christmas to all, and to all a good night!”