The Definition of Superstition:  is a belief or notion, not based on reason or knowledge. The word is often used pejoratively to refer to supposedly irrational beliefs of others, and its precise meaning is therefore subjective. It is commonly applied to beliefs and practices surrounding luck, prophecy and spiritual beings, particularly the irrational belief that future events can be influenced or foretold by specific, unrelated behaviors or occurrences. (Latin superstitio, literally “standing over”; derived perhaps from standing in awe; used in Latin as a unreasonable or excessive belief in fear or magic, especially foreign or fantastical ideas, and thus came to mean a “cult” in the Roman empire)

So, are the following weird baseball superstitions just plain strange or is it a case of Obsessive-Compulsive Disorder?  You decide:

– Chris Coste smells his bat after hitting a foul ball – he says it is part superstition and partly because he likes the smell of burning wood.

– Ron Wright always shaved his arms, believing it helped him hit.  He was called up to the majors in Seattle in 2002 after 8 years in the minors:  In three at bats, he managed SIX outs with 1 strikeout, and then grounding into a triple play, then a double play his final at bat.  He was sent to AAA never to be seen in the Majors again.  I don’t suggest anyone try the arm shaving anytime soon.

– Wade Boggs (1982-1999) earned the name “Chicken Man” because he religiously ate a whole chicken before every game.

– Turk Wendell (a former Phillie) use to chew exactly 4 pieces of licorice while on the mound and then brush his teeth in between every inning.  He also liked to wave at the centerfielder before pitches – whoever was out there must have really been wondering about Wendell.

– Kevin Rhomberg (Indians, 1982-1984) had some serious issues.  He was obsessed with having to touch a person back if they touched him.  He did this everywhere; the clubhouse, the dugout and even on the field.  If he was tagged when he was on base, Rhomberg would wait until the end of the inning and then chase down the infielder and touch him before he reached the dugout.  Someone please fetch Dr. Phil…

– Barry Bonds always kissed his gold cross necklace after he hit a home run.  Maybe he should try this strategy in court?

– While with the Yankees, Roger Clemens always visited Monument Park to touch the head of the Babe Ruth statue before he pitched in Yankee Stadium.  He also gave all of his children names that began with the letter K.  Maybe now he should send them all to law school.

– Frank Viola (1982-1996), a three-time MLB all-star pitcher and former Cy Young winner, would clean the mound before every inning, kicking up the dirt exactly four times. However, if something went awry, he would try three or five.  Whatever it was, it worked!

– Mel Stottlemyre, the Yankees’ longtime pitching ace (1964-1974), did not like stepping on the foul line.  One day, after a coach teased him about it, he went ahead and stepped on the line.  Immediately following, he gave up 5 runs in one inning.  He never stepped on a foul line again.  Greg Dobbs, current Phillie, once admitted to having this superstition.  He may have been joking at the time, but I was not about to ask.  I would have felt awfully bad if I embarrassed him by insinuating any silliness on his part :o)

– Pitcher Jose Cuellar (AL, 1964-1977) had many superstitions.  He would not allow anyone to throw him the ball to start his warm-up pitches or between batters.  He insisted on picking it up off the ground.  Teammates would roll him the ball and if they didn’t and threw instead, he’d move aside and let the ball drop.  Cuellar also had a ritual of eating Chinese food the night before any game he was going to pitch.  And on the day of that game, he showed up to the clubhouse dressed in all blue – suit, shirt, tie, socks and shoes; all blue.  He even drove a blue car.

– Bobo Newsom (NL & AL, 1929-1953) would never tie his own shoes on a day he was scheduled to pitch.  He literally stood around until someone did it for him.  Really, I think this is just plain laziness J

– Lou “The Mad Russian” Novikoff (NL, 1941-1946) insisted that anytime he batted, his wife Esther, was to taunt him mercilessly from the stands.  Apparently, the shouting of insults from his wife made him angry and he hit better when he was angry.  Marriage counseling anyone?

– Kevin Elster (Mets) discovered in 1988 that sleeping with his bat was the key to success.  Once the hitting began, he even took the bat out to lunch with him.  Separation anxiety, perhaps?

– Houston Astros Craig Biggio does not wash his batting helmet for the entire season.  Yuck!

– Former pitcher Charlie Kerfeld (1985-1990) had a lucky “Jetsons” T-shirt.  After winning 6 or so games while wearing it, he decided to wear it every day until the magic wore out.  I am guessing players tried to avoid him in the clubhouse…peeww!

– Dion James (Braves, 1988); during a 16-game hitting streak, James decided not to wash his underwear for fear that it would break the streak.

– Vida Blue (pitcher, Athletics) believed that the same baseball cap he had worn since Opening Day in 1974 had special powers and brought him good luck for 3 straight seasons.  By the time 1977 rolled around, it was so dirty and faded that umpires refused to let him wear it any longer.  Blue burned the hat on the field and then proceeded to lose 19 games, a league high that year.

– Tito Fuentes (Giants, 1965-1974) liked to spray “voodoo juice” on his glove, arms, hands and feet.  He also carried a pouch with an eagle’s claw and turtle shells in his back pocket.

– Steve Finley / Darin Erstad; as teammates on the Los Angeles Angels of Anaheim in 2005, both players have worn a small leather pouch containing a mysterious concoction of minerals around their necks to ward off injury and slumps.  The pouch was given to Finley by Craig Counsel who then passed it to Erstad in his “time of need.” 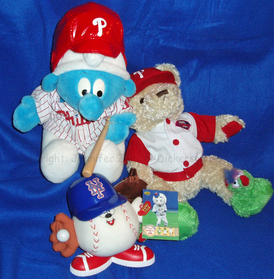 Yes, it is true that I believe Smurfs have magical voodoo powers.  And damn if I wasn’t right!  J-Roll Smurf and friends (photo) beat up on the NL East opponents all year and sent the Phillies straight to a World Series victory!  Yes, J-Roll Smurf takes full credit J

And no list would be complete without the old standards in Baseball Superstition:

– Sports Illustrated is a bad magazine to have your picture on apparently.  In a 2002 study, it was found that 37.2 percent of the time (913 out of 2,456 covers to that date), something bad happened to the cover subjects. That includes nearly 12 percent that suffered injuries or death.  The very first SI cover was of Eddie Matthews of the Milwaukee Braves; shortly after the cover ran, Mathews injured his hand, missed 7 games, and the Braves fell out of first place.  Spooky or coincidence?  Hmmm….

– The Curse of the Bambino: Sox owner Harry Frazee sold Babe Ruth to the Yankees and it took the Sox 84 years to overcome the curse.  The Red Sox won the 2004 World Series, ending a lifetime of “bad luck.”

– The Curse of the Billy Goat, a curse on the Chicago Cubs: Tavern owner William “Gus” Sianis was angered when his pet goat was not allowed into a World Series game in 1945. Sianis then announced that Wrigley Field would never see another World Series.  Apparently, this curse is still in effect today.

– The Curse of William Penn on the city of Philadelphia:  Supposedly, when Philadelphia City Hall was built with a statue of William Penn (founder of Pennsylvania) atop it, there was an agreement that no building in the city would rise above the Penn statue.  But in March 1987, a modern steel-and-glass skyscraper called One Liberty Place opened three blocks away which was 397 feet taller than City Hall, thus enacting the curse.  No Philadelphia professional sports team had won a major Championship after that, until just this past October.  It took 100 sports seasons and 25 years to get a win, but the Phillies did it by winning the World Series on October 29, 2008.  And so, the curse is over.  Philly fans everywhere can rest easy.

Read more at MY OTHER HOME PAGE!  Phillies Phollowers has joined forces with Phightin’ Phils Phorum!  Please check out our new site and bookmark it.

And for the football fans, I have also started a Miami Dolphins page, The Dolphin Pod!  All Dol-Fans, and anyone else who wants to say hello is welcome!